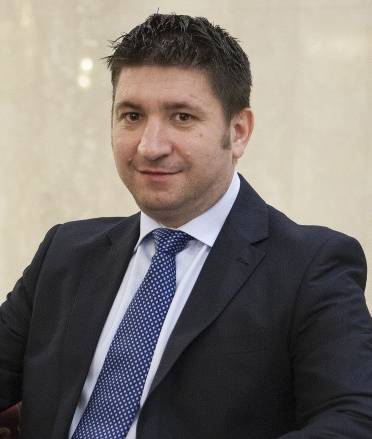 Eugen Platon A solution oriented leader driven by passion for excellence, combined with experience in online.

My suggestion is that you do not try to match with a partner based on a personality test. If you cannot collaborate with a wide variety of personalities, you're not actually a good executive in practice. I know what the web site says about the 16 personalities, but it doesn't connect personality to practical application or you would have had your answer already.

Instead, define your plan to find collaborators in terms of skills, interests, and styles. Most important you need someone who can help you by filling a skill gap. Second you need someone interested in the same type of enterprise you're hoping to build. And third you want someone whose style of working makes sense for the amount and type of work that needs to get done.

You might somewhat align style and personality, but they're not the same thing.

If you're a big fan of personality tests, I recommend you instead switch to the Enneagram. At least that will teach you why you run into repetitive issue and how to compensate for such weaknesses. Personality still needs practical application and your business partner still needs to match skills, interests, and style. For example, you wouldn't hire an intellectual property lawyer with the right personality match if what you need is a a mechanical engineer.

Paul did a great job in answering your question. However, you never told us what is the class of problem that will be the business. Doing something better then others that make similar products or services is different then a business built on a leap of faith, creating a new industry or leaping to a new method to make an old product. The choice of a co-founder are totally different for these two startups.

This is a marriage and like a marriage failure is assured if you put values of what is brought into the union. The objective is to make a whole. So like a jigsaw puzzle every piece is needed to make it complete and every piece has the same value. Failure is also assured if you place a value on the parts added after the union to complete the puzzle. So long as each person is diligently working to complete the puzzle and assuring that all pieces are in the correct location then judgement of value is irrelevant.

If you can not fully accept the above criteria then I suggest you choose to have limited partners that have a contractual agreement to receive compensation for future outcome.

If the type of business requires a leap of faith. You must be the person capable of creating the critical parts of the leap to have limited partners.. Otherwise marriage is the only option. The marriage is a success if the leap of faith is backed up with the required innovation. It is a piece of the puzzle you can not provide, but without it the jigsaw puzzle can never be finished.

Often the person capable of the leap of faith in the next phase is a detriment to the business. How that situation will be handled must be agreed upon before the marriage occurs. This may appear to be the limited partner situation, however; your totally in control of the terms for a limited partner. Your not totally in control of a faith leap. Understand that leap of faith is just that. You can not compel it's creation. The person that agrees to find the needed piece has no idea what it is, none when he accepts the task. He may accept terms like the limited partner.

PS: I have ~ 3 dozen patents and have a few that I can not find a logical path to how I came up with the piece. I can locate the elements but no reason to combine them into the needed piece. I have accepted limited partnership but these were companies with profitable product lines and the failure to find a solution would insignificantly effect their bottom line. This is not your situation.

Eugen Platon A solution oriented leader driven by passion for excellence, combined with experience in online.

Thanks Paul for the very detailed answer. My question was focused only to personality type but your answer covered also a very important aspect of filling the skill gap.

I’m not a psychologist, so this isn’t a professional opinion, but just one from someone that enjoys Meyers Briggs and the concept. That being said, I would say it all depends on the type of startup. Obviously an Engineering firm or Architectural firm or something like that requires that your co-founder have those specific skills which usually go with a personality type. But, if you just wanted to start a business and were looking for good compliment, I would say ENFJ-A, the Protagonist. But, as that accounts for only about 2% of those that take the test, it’s not as likely.

So, the question might be why I would pick that one? An ESTJ-A seems to me to be someone who can manage or refine an existing product or process. They also do a great job as a “manager” with the Judging attribute in keeping neat and in order. Where I would think that you could use the counter-balance would be in the Observant/Intuition part mostly. Intuition seems to lend itself to creativity and thinking outside the box. While you pride yourself as a Thinker, Feeling is not to be overlooked, as it will be the employees that ultimately make the difference in your business venture. You need to have empathy for them. Judging is good probably that you share with a co-founder, because, having differing opinions here could cause long term problems, prospecting might be good, and especially in the form of sales. And Assertive is always good as a co-founder.

I would also ask how many times have you taken the test, did you get the same type? I have taken the test as a university student, father (16 yr old daughter first introduced test to me), boss, business owner and a bunch of times in between. I flop between ENFJ-A and ENFP-A depending on what’s going on around me. J as a boss/parent, P as an employee/student. I graduated last December with an Engineering Management BSE, heavy math and analytics, so I’m definitely no stranger to Thinking, but I find the Meyers Briggs questions relating to this seem to be more about making others feel a part of the group. As I self identify as a Servant Leader, my Lit Review subject, I am always interested in others on my team, which explains the F.

I think it’s also important to look at the individual scores and percentages to see what might be the best fit. For instance, I sit right around 5% either way when it comes to the J or P. Which makes it where I am likely to switch those based on the circumstance. But, I am usually 60%+ on Extrovert and around 75% when it comes to Intuition. Only about 25% for Feeling. So, some of those traits are way more a part of my personality than others.