Is starting 2 start-ups at once crazy?

My co-founder and I are down to the short straws on a new start-up. We've vetted several ideas and are down to a few. We feel that 2 are potentially home runs but they're very different. One is a pure B2B play that can entirely disrupt a very large, economically important segment of the freight transportation sector. But the requirements phase is going to take some time to nail down the scope so we get the product feature set right. The other idea is highly disruptive. It's a "new paradigm" for something (sorry I can't say more about it) that's both B2C (consumption side) and B2B (supply side).
I'm actually thinking about doing both. The pure B2B one is going to take some time to scope, design, build and to gain a modest level of traction to prove the concept. The new paradigm one, while highly unique, is actually pretty simple to build technically speaking. Think how simple SnapChat is. That's what we're talking about.
So is it crazy to do both simultaneously? I have the bandwidth and with a few additional dev resources we can execute both and get the first new paradigm product out in 3 to 4 months. It's one of these "win big or fail fast" type of things that just might be worth the gamble. 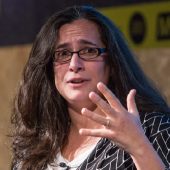 @Alex Eckelberry - What you're saying and the original question are two different things, however. You had one company and worked on a couple different products. That's not two entirely separate companies with different goals and products and skillsets and audiences. Shifting from one product to another that has more traction is smart. But it was still all within one company.

Short answer - yes, you're crazy.
Longer answer - if you are going to need outside funding doing two at a time is going to be challenge and, if you find investors who will back you, they will probably apply either a significant valuation discount or otherwise impose penalties, restrictions or high performance requirements.
If you don't need outside money (or can make it far enough to borrow rather than raise equity) AND you are really confident about your skills and capacity, go for it.  Remember, however, that most people who are running multiple businesses simultaneously have the resources to be steering the ships but not handling much day-to-day executive or management duties.  Mark Cuban, Richard Branson and Donald Trump keep very talented people around them to run their companies - they are the brand and the keeper of the vision but not the management.
Good luck - sounds like fun whatever you decide.

Most people will tell you no, but I actually find the pre-customer stages of a startup fairly low intensity, and have successfully dipped my toes in the water before getting a strong signal on one and pursuing that full-time. It's doable in the exploratory stages; it becomes much harder to maintain later.

While it may seem like a wise decision to work on these in staggered parallel, I would not endorse this path regardless of the ease of implementing MVPs. It's not a matter of possibility, but probability, of whether you can make either succeed when partially focused on both. Startups are tough enough so there's no need to stack the deck against yourself. Do your future self a favour and validate each idea with some customer research and interviews, then commit to the one you truly believe you can make succeed. If you do succeed, know that your track record, wealth, and gravitas will attract many suitors to just go and do it all over again for your favorite idea and market at that time. Mani Fazeli @mcfazeli

I found this statement from you interesting, @Richard - "So the desire to do both is not necessarily a reflection of doubt about which one will work bit perhaps as a means to hedge bets."
Starting a company from the ground up takes just about all the time and resources you've got. You have to believe fully in your product to even get to an MVP. Hedging bets? That's probably, IMHO, the worst reason to start both at the same time. If you were incredibly passionate about both products and felt as if it was Sampson's choice to choose between the two, that's one thing. But if you think this will increase your chance of at least one of these products working out, that's not the right reason to go for it.
I see you're an investor & advisor - if you were approached by an entrepreneur who had two great ideas and was trying to work on both at the same time, would you invest? Would you be willing to be an advisor? Probably not.

Let me whittle this down a little. """ My co-founder and I are down to the short straws on a new start-up. We feel that 2 are potentially home runs but they're very different. a) disruptive B2B play of the freight transportation sector. - But the requirements phase is going to take some time to nail down the scope so we get the product feature set right. - The pure B2B one is going to take some time to scope, design, build and to gain a modest level of traction to prove the concept. b) highly disruptive spin off of snapchat. - both B2C (consumption side) and B2B (supply side). - while highly unique, is actually pretty simple to build technically speaking. - 3 to 4 months - win big or fail fast - gamble c) both """ While the insight may be greater, this crafted narrative suggests you have two risky assets, and one is riskier than the other. So you think that the second option is a better project, but has a higher risk. Is it really a better project? What can make that project fail fast? By the way, snapchat isn't a trivial piece of software. The simplicity of design in it's interface belies a literal network of agreements. If a project seems simple on its face, I would assess that we don't know enough about it. I'll argue one last thing. If a project has a verifiably huge expectation, then you can use that expectation to amortize your risk, by pursuing well-fitted agreements with your investors. There is no need to execute a project that you actually, personally, feel is *risky* in every sense of the word. - Brian Ledger Dir. Front End & Networked Operations Coherent Path 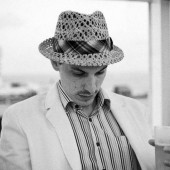 Starting up 2 companies and vetting 2 concepts through lean experiments can be very different things.
If you haven't yet, you should read Lean Startup (it's like a 1-2 week read at most).

You and your co-founder are in the best position to know if you have the bandwidth for both ventures simultaneously. If you raise outside capital though, expect that investors will demand your full time attention to the venture they're funding. (It might be possible at that time for you and your co-founder to split up and each devote full time to one venture or the other.)

Neil, Peter: Regarding funding, I can fund both endeavours. So I'm not worried that much about that at this stage. Yes, there will likely come a time that more funding will be required but that's easily a year away following launch. By then, I think it will be clear which idea is giving the strongest signal.

Actually starting 2 companies at the same time?  Yes, that is crazy.  In fact, you're arguably crazy to try to start 1!
However, when we started we had 2 - not really overlapping though.  Had two separate sets of business cards.  And we may have even thought we were going to start both (I don't remember what we thought).
What ended up happening, however, is one gained traction faster than we expected and the other got stuck really fast.  In other words, it turned out we were just vetting ideas - but maybe taking it (and ourselves) a little more seriously than we should have.  Or maybe as exactly seriously as we needed to - we were all in, mentally.
It wasn't a bad thing - yes, others thought we were crazy and acted like we were, but it kept us thinking laterally at the beginning.  Once investors were involved though, we made it clear it was the same company (not a side project) and they were investing in us and all of our time.  Further, by that time, it was clear we were pursuing the one with the faster traction full-time (not because we "killed" the other one, but just because it was the one we wanted to work on).
So, I'd say don't be afraid of this, but equally maybe don't think you're going to have two independent legal entities you split your time on and have different investors on in a year.  Equally do not think it somehow gets *easier* past the initial stages.  We thought we were working "so hard" initially.  Now in retrospect, we kind of laugh at ourselves - those were the easy days!  We had time to think about things like 2 different startups!
I can't quite tell from your post if this is your situation, but the thing to be deathly afraid of is not two different startups (it will figure itself out - you don't need anyone's advice), but two different business plans for basically the identical market.
In this scenario, you are dividing your efforts and there's unlikely to be a natural culling here - most likely both approaches will fail and you'll conclude the market just isn't ready for you, when in fact that may not be the case.  You have to make a call on a business plan - change it all you want, and successively try new paths, but 1 market = 1 strategy or else you're not going to get anywhere (in my experience at least - we did a lot of strategy hedging early on and really only made traction when we were willing to suck it up and make 1 choice, risking being wrong, but putting everything we had towards the goal).
You can't get real feedback from customers when you show up with 2 totally different solutions/products.  They get confused and start thinking you're a custom dev shop - and so they start asking for things they wouldn't have asked for if you had just kept it simple and shown them one.  You can try to split your customer list, but now you're really dividing your opportunities; plus when the meeting is going poorly, you'll probably always pull out the other product.
With two different markets, you're not compromising on anything except your time - and early on, it can be a good thing to be thinking widely: it can keep you moving forward on something, rather than getting stuck and burning out on a startup that was never going to make it for a reason you didn't understand when you started and weren't willing to consider once you were into to it.
Anyway, hope this helps - good luck!  Most of all, though, don't worry too much about being "wrong" here, whatever you decide to do.  Stay open-minded and keep learning!