How do you bring open-source to market and pave a path to revenue?

I've asked this question before, but hopefully I can distill it down.

Open-source is a big deal nowadays, internet companies have latched on strongly that users == money.  That's why Meteor.js has received $10M in funding and a similar open-source style technology for WebGL has received $20M.

The browser space itself has gone whacky, if you put it in perspective.  Standards have burgeoned 200% in the last five years, and if you look at the new proposals, the growth curve is exponential.  You feel this every day when recruiting new developers for HTML5 projects, as you can no longer hire a web developer but you have to instead find someone specialized for what your project needs are.  This has drastically raised the costs of developing web applications, and in some cases it has truly raised the technical bar for what it means to code on the web any longer.

Complicating all this is that the role of W3C as a safeguard for the internet as a marketplace seems to be deteriorating as large Fortune 100's dominate the specifications and academics struggle to keep up with the pace, and the costs are too high for smaller companies to participate.  What we result with is an ultra competitive landscape where the elite internet companies are fighting it out with their respective proprietary technologies.  Moreover, we've lost the core audience of developers that would have cried wolf back when Microsoft was abusing markets -- maybe they've been bought out by Google, Facebook, and Apple.

As a result, nowadays there is Google Angular, Google Polymer, and Facebook's React.  All of these technologies I've had to adopt simply to maintain an active role in the industry, and the brands speak louder than the quality of the software.

Disregarding this particularly volatile space, how would you go about taking a company pet project that is an open-source repository on GitHub and bring it to market?  How do you motivate marketers and identify those that have the interest or the acumen to work in this very technical and often virtual space?

Two ideas I'm playing with are as follows: 1) raise capital with users/volume as an exit 2) reach out to [INSERT NAME OF BIG COMPANY HERE] who does not yet have a presence in the space (similar to an acquisition)

Is it realistic to suggest that users == money in this space?  Where does the true value transaction take place?  Is this a space where the big players are willing to pay large sums of money to fight for traffic and control of the development culture? 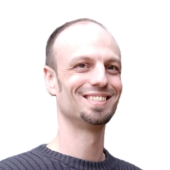 Is it realistic to suggest that users == money in this space?
In my opinion, no. Users represent potential, but not money. The term "users" is highly generic. Are the users casual or vested? Open source draws a high number of casual interest, especially early in the life cycle.
Where does the true value transaction take place?
For users, the true value transaction is the utility derived from the product and the speed at which they can use it. They aren't just free financially... they free up time and overhead. It's the perfect way to perform a more in-depth trial and see if it solves problems in your unique circumstance. I'd sum it up as "flexibility".
The business value is built over time. Most open source revenue is generated in services (add-on, consulting, etc) or using a commercial open source approach. It's all about reaching new customers or increasing the value of existing customers. When people invest time to use open source, they're investing in the project leadership. In some sense, it's similar in some regards to creating vendor lock in (like SugarCRM).
Is this a space where the big players are willing to pay large sums of money to fight for traffic and control of the development culture?
Nobody other than the big players can provide a definitive answer, but my personal "nutshell" answer is"sometimes". However; I believe it's less likely to see investments in outside companies.
For example, Google, FB, Microsoft, Amazon, etc all hire developers specifically to work on open source projects. Sometimes these projects spin off, but it's an organic process (not like fundraising). Look at Bootstrap, or the newly formed npm, Inc for examples.
In my opinion, things like Meteor.js are NOT the norm, and you'll notice their lead investment came from a VC, not a major tech player.
As for gaining users and contributors...
I have several friends who have built successful and well known open source companies from scratch, but none have been sold. They were all bootstrapped to profitability, and each of them found their own market. Users became contributors. Contributors became employees. Personally, I launched an open source visual desktop web server this summer. It offered significant value in convenience via simplicity, and this resonated with developers. I've had 12K downloads in that time, so it's not a huge market, but it's also not "just another" Github repository. I created a more professional website than the average open source project, and I blogged about the use cases. I made YouTube videos and setup a mailing list. I found my audience by looking up readership numbers and targeting syndicate blogs... then I contacted those publishers and pointed them to the website. I put a lot of leg work into it, and I made it work without a monetization path. My software is incredibly simple (the main draw), and there have been a ton of enhancement requests. These requests have started turning into private messages like "I'd pay for _____ feature".
The bottom line is, in my humble opinion, there is no quick way to launch an open source business. Those that have are the outliers, not the norm. These things have to grow organically. If you can't recruit a partner in the beginning, then you have to build the software yourself. You have to prove momentum... and that means investing time and/or money.

I worked as Engineering Team Lead for a company that worked hard to build commercial offerings on top of open source.  The company is http://www.gwos.com/ .  I'm also an avid open source developer and have worked with companies that provide open source as part of their product portfolio and as a way to marketing their offerings.   Let me bring up a few points:
1) Open source is a fantastic way to gain exposure for your company.  If your company has a popular open source project with a growing developer community, you immediately have insight into your customers as well as communication channels.  Also, developers are hungry for fixing bugs. You can utilize them for assisting in improving your product (use a bug bounty!)
2) Open source is NOT cripple-ware.  When you provide an open source project, it is imperative that the project has value that stands on it's own.  It's meant to compliment your portfolio, not be the entire product with limiting features.  This annoys developers and you won't get a favorable adoption rate.  For example, if your product is installed on a developers web server, ensure it has a proper installation process.  Having the developer do massive legwork just to get your product installed, but touting a stellar installation process as part of your commercial offering is hidden crippleware.  Avoid it.
3) Open source is a great way to gather product/market fit with a MVP.  Continue to hone your open source projects to really obtain the most traction.  Once you've really honed in on your users' needs, you can determine the best complimentary value-adds that are commercial that sit on top of your open source stack (if you even want to have software be part of it).
4) Leverage licenses.  There are open source licenses that allow full modification rights to the user.  There are licenses that are highly constrictive.  Try to use the most liberal license available that still works for your business model.  For example, if you have patents involved, there are licenses for you! Take a look at http://choosealicense.com/
5) Choose value-add products and/or professional services.  If your open source project is complicated, you can easily offer professional services to build a revenue model.  This means consulting for administration and using your product.  Charge for training.  Charge for support.  There are a lot of businesses that like the minimal to none license costs but will still need professional services. If your open source project works as a platform, you can build value add software that sits on top of your platform that is available as commercial offerings.  This is also a solid revenue model.
Now, if you build solely for an acquisition, you're not going to build a solid open source project.  Focus on building a powerful tool for developers and building an appropriate revenue model as described above.  The acquisition will follow naturally if you go critical mass.  Just remember to protect your open source users in the acquisition phase.  They were your natural adopters and open source needs to live on!
Good luck!

It is the one area in technology with high-leverage and nearly no coverage.  The bloggers won't touch it since it's too technical.  There is little consensus as a result, and I'd call it a "true" market that currently has a set of undefined rules or obviously arbitrary rules set forth by really large company cultures.

When you study the contribution statistics, even most active projects receive 80% of their updates from a very core group of people.  This matches my experiences on such teams.  You can cap off the other side since I've met one developer who thinks, "push a bug fix to a library like Backbone.js and that will look really good on your resume".  What matters most then?  Media coverage?

There are unseen variables as well that go into the community, such as the number of Meetup groups, conferences, StackOverflow topics, and company budgets apportioned to adopt open-source technologies.  It's always been the case that lifelong engineers work by day with technologies they can't entirely choose and they pick out what they'd dream to work with in the evenings (hence open-source).

These are all simple anecdotes, but I'm lacking consensus as you are and it's a big pink elephant to me since we all use these types of technologies every day without evaluating the choices we are actively (or passively) making.

Sure Mike - the project is http://fenixwebserver.com.

This is excellent information, Corey!  Thanks for sharing!  Can you plug your project name here?

I have a similar question, a possibility of turning a project/startup into an open-source solution.

First, if its open source, it already 'on the market', so the questions really are - how to build it up, and how to monetize it, if that's the goal. Often, that's not a coproate goal per se.

I would say the value of any open source project is the community - of contributors and users.
If you have enough users, a possible service based or freemium saas biz model works.
If you have enough contributors, well, that's what makes it works.
My questions are: I have a potential open source project, how do I recruit and obtain contributors? and users? How to do these things wehn you DONT have a monetization path or marketing budget?
I wish I knew.