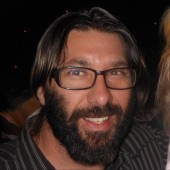 I think there are enough people wanting to use bitcoin to make purchases to look at it as a payment for your business. When http://WriteOrRead.com launches in a few weeks, we will be taking bitcoin as payment.

I currently use bitcoin to pay for domain names and bootstrap templates. I will be moving some of my hosting to services that accept bitcoin. I didn't mine to get my bitcoin, I purchased what I have with USD. I've been waiting for the current boom to level out to buy some more.

I don't think the ease of mining will have as much of an effect on the value of bitcoin as competing currencies, widespread use and ease of accessibility. The future of bitcoin will depend a lot on adaptation and how successful governments are in trying to squelch a competing currency.

"additional mining hardware could at most halve the current trading value" - mining has limits to how many coins could be created every 2 weeks. so how does faster hardware halfs value of bitcoin?

The bitcoin mining market is holding its breath on the advent of new multi-GHash/s custom ASIC's hitting the market.  The first preorders to deploy will be able to garner a 100% ROI in days, but in doing so, most of the existing iron dedicated to bitcoin mining will dramatically lose its cost-effectiveness.  The price/performance will skyrocket until the mining difficulty scales to match.
The providers of this hardware have routinely slipped deadlines in the past, and it may be a long period of time between when the first preorders and an order placed today will be delivered, even though the only difference in price is the opportunity cost of waiting that extra time with that money for those who got in early.
Placing an order now may put you anywhere from a return on your investment in days, years (because difficulty got raised by those who receive their units months ahead of you), or never (company ends up never shipping your unit).
With economic uncertainty in parts of the world and Bitcoin's status as a pecunia franca, these technological developments may be completely absorbed.  Similarly, with over half of the bitcoin that will ever exist already being mined, perhaps it can be argued that additional mining hardware could at most halve the current trading value.
Disclosure: I own 0 BTC.

At the current price of $95 per bitcoin,this year there will be $125M worth of new coins made,. not even considering that most insiders expect it to go over $200 this year and with future value in thousands per bitcoin. So I have decided to work on a new ASIC based bitcoin mining system.

The thing that will drive Bitcoin's adoption is the ability to use it in transactions for goods and services. It's still in the very, very early stages, and only pretty serious geeks are using it. The current market cap of the bitcoins in circulation is about $1B, which is a tiny, tiny fraction of the amount of currency in circulation (USD alone is several trillion). Because bitcoin transactions can be executed for next to nothing, I think that they could provide a much more efficient alternative to credit card transactions. If it takes on a larger share of the transaction market, it's value relative to other currencies would continue to grow.
Bitcoin democratizes banking, allowing anyone to pay for things without having to go through a series of intermediary banks and credit card companies. When anyone can have this capability on their desktop, I think that will open up a lot of business opportunities (which I've been exploring for a while). It's still very, very early in the adoption cycle (kind of like the Internet in the '80s), but the underlying technology is brilliant.
As far as Matt's point about mining, I agree with Richard. Mining is really not that important in the larger scheme of Bitcoin. It's a way to distribute the coins initially and it provides a mechanism to incentivize people to strengthen the network. However, the vast majority of Bitcoin users will have no need to be involved in mining.
If anyone is interested in discussing Bitcoin oriented businesses, definitely let me know!